Today, Meade Instruments is commonly acknowledged as one of the most innovative and dynamic companies in the telescope market. Known for its groundbreaking leaps in telescopic design, Meade has introduced dozens of improvements over the years that have made amateur astronomy easier to access and more enjoyable than ever.

Founded in 1972, Meade began business as a one-man, mail-order supplier of small refracting telescopes. As early as 1973 it became apparent there was a large, unmet need for quality telescope accessories, prompting Meade to add lines of Orthoscopic and Kellner eyepieces and, soon after, lines of precision rack and pinion focusers, viewfinders, filters, camera adapters and other accessories. Even then, Meade’s products were recognized as having custom touches not generally available on competing models—the focusers, for example, had spring-loaded gearboxes that permitted smoother action throughout the entire travel distance, and the viewfinders included eyepieces with wider fields than had been commonly available.

By 1977, Meade Instruments offered a broad range of telescope accessories and parts for the serious amateur, a range of accessories and parts that, in fact, permitted the company to bring out its first in-house manufactured telescopes, Meade Models 628 and 826 6-inch and 8-inch reflecting telescopes. With Meade reflectors American amateur astronomers found that they had, really for the first time, a telescope manufacturer that provided a quality product at a reasonable price, that continually updated its products technically and, above all, one that stood firmly behind every sale.

Word began to spread among amateurs that Meade Instruments is a company that can be trusted, one that does and means what it says. These values, now so often abused, are still very much at work in the Meade Instruments of the present day.

In 1978 Meade Instruments took on its most formidable challenge to that date: the Schmidt-Cassegrain telescope market. Development of the original Meade 2080 8-inch Schmidt-Cassegrain required three years and all of the financial and engineering resources that the company had at its disposal, notwithstanding the significant growth that the company had experienced in the late-1970s. But Meade was determined to develop the state of the Schmidt-Cassegrain design — a design that was strongly felt to have overpowering advantages for the serious amateur, but one that was not being technically well-advanced due to an absence of competition.

With the announcement, in September, 1980, of the Model 2080 — the first commercially-available 8-inch SC to include worm-gear drives — Meade Instruments began to grow rapidly, and to amass a list of firsts unrivaled in the amateur astronomy market:

The LX3, introduced in 1984, the first SC to include an integrated electronic drive system. This is also widely recognized as the first integrated astrophotography system in the mass market.

The LX6 in 1990, featuring Smart Drive™, the first permanently-programmed Periodic Error Correction software. Considered a luxury model upon its release, many of its features are still found today on the LX200 line. 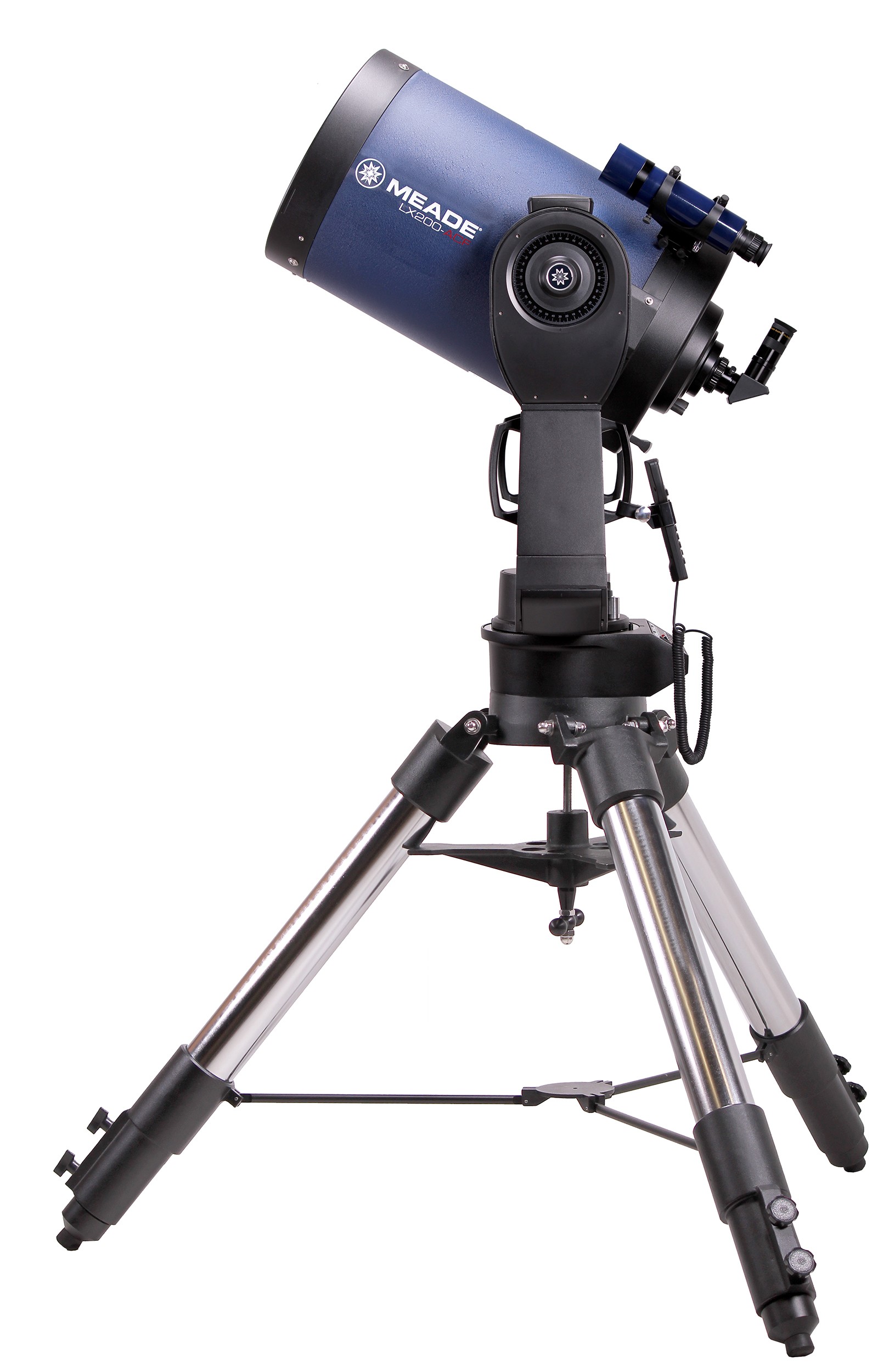 The LX200® in 1992, the first commercially successful GoTo telescope system. With the launch of the LX200, Meade also introduced a new, heavier fork-arm mount that dampened vibration, establishing the LX200 as the new standard in amateur astrophotography platforms.

The ETX Series with AutoStar in 1999, the first portable, fully-computerized telescope. Combining lightweight portability and the convenience of GoTo electronics, the ETX became an instant favorite with the astronomical community — a position it still holds today.

Moving into the 21st century, Meade has continued its series of industry firsts, solidifying its place as the innovative leader in the amateur astronomy market:

Meade’s UHTC in 2002, the first ultra-high transmission coatings for commercial telescopes. Precisely designed to improve the performance of a telescope’s optics, these advanced multi-coatings increase light transmission — on average across the visual spectrum — by about 15% (for example, Meade UHTC coatings will increase the image brightness of a 10-inch LX200-ACF by the equivalent of about 0.75 inch of aperture), providing much higher performance for observers and astrophotographers alike. Still the industry standard, these coatings are available only from Meade.

Advanced Coma-Free optical system, the first affordable optics delivering Ritchey-Chrétien-like performance, in 2005. A traditional Ritchey-Chrétien (RC) is a type of reflector that delivers a coma-free view via hyperbolic primary and secondary mirrors. Because the mirrors in these telescopes have always been very expensive to make, few amateur astronomers could enjoy them. Suspecting that there was a better way to design this optical system, Meade engineers developed a radical new Advanced Coma-Free design by combining a hyperbolic secondary mirror with a corrector-lens-and-spherical-primary-mirror combination that performs as one hyperbolic element. This ACF design produces a coma-free, flatter field of view that equals traditional RC telescopes at a fraction of the cost. The design also eliminates diffraction spikes and improves astigmatism, both of which are inherent in the traditional RC design. No other optical design delivers both the level of performance and affordability as ACF.

LightSwitch Technology, the first one-touch, fully-automatic alignment system, introduced in 2009. Meade’s revolutionary LS LightSwitch series of telescopes use advanced technologies like GPS, LNT and ECLIPS CCD imaging to do what no other consumer telescopes have done before: take all the hassle out of using a telescope. Simply flip the switch and the LS automatically aligns itself without any input from the user. Quite simply, it is the most sophisticated, easiest to use telescope ever produced.

Astronomer Inside, the first integrated, multi-media content, introduced in 2009. As an integral part of the development of the LS line of telescopes, Meade produced audio and video content to allow users to experience the Universe like they never had before. Culminating in over five hours of fascinating facts and history, it was decided the content was too good not to include with other products. A decision that led to the: AudioStar, the first audio-enabled, computer control handbox, in 2010. With all the content and no delivery system, the next step was obvious: design a handbox with all of the features of our ground-breaking AutoStar, with the added ability to deliver audio content. First included with the StarNavigator line of introductory telescopes, AudioStars are now standard equipment with almost all Meade telescopes.

In 2012, Meade celebrated its fortieth anniversary. Few telescope manufactures can claim such longevity. And now, as Meade embarks on its fifth decade of providing advanced technology coupled with affordability, we've introduced two new platforms encompassing another list of firsts the LX850 and LX600 with StarLock.

The LX850 with StarLock is the latest in a long line of advanced astronomical products. Using revolutionary new technology, every aspect of this system has been designed to deliver the new standard in astrophotographic and visual performance. StarLock — the heart of the LX850 —makes target acquisition on your imaging sensor and accurate guiding during exposures completely automatic. With Meade’s exclusive LightSwitch technology at its core, StarLock uses a 80mm f/5 optic and a super wide-angle lens in a two camera system that automatically finds your target in ultra-high precision, immediately captures a field star as dim as 11th magnitude and then guides to an incredible accuracy of one arcsecond. StarLock achieves this amazing accuracy because, unlike add-on guiders, StarLock is integrated into the telescope control system and communicates directly with the motor controllers in real time with a maximum precision of 0.01 arcseconds.

The LX600 with StarLock builds upon the venerable foundation of the LX200, integrating Meade’s’ StarLock full time Autoguiding, fast f/8 Advanced Coma-Free (ACF) optics, detachable fork arms and the all new precision CNC-machined X-Wedge. This telescope combines the visual ease-of-use of alt/az mode with the option to perform serious astro imaging with the addition of the X-Wedge. Never before has there been such a versatile astronomical instrument.

Meade Instruments has built its reputation and its products through ground-breaking and industry-leading innovation. You’ll find that on every product we make. Meade Instruments is adding technology to all of our products to make them easier and more fun to use. At Meade, we believe in using technology to make astronomy accessible and enjoyable to everyone, regardless of your experience level. It's the way we've done business for the past four decades, and the way we'll continue to do business into our fifth decade and beyond.